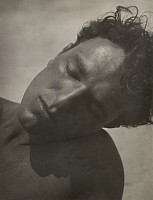 In 1925, the same year André Kértész moved from Hungary, Jean Moral began photographing in Paris.  Like Kértész, his photographs exemplified the inherent aesthetic of Modernism, which by the mid 1920s was in full swing.  Moral’s photographs from 1925 to 1940 depict his eye for graphic abstraction and tight composition.  His personal expression is most apparent in his images of Paris, his intimate portraits of his wife, his self-portraits and the more experimental images he made with photograms and double exposure.